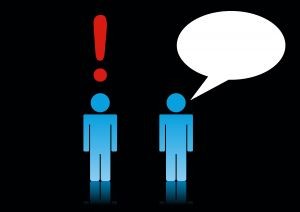 Have you ever stumbled over too many “he said” and “she said” in your story?
One of the followers of my blog apparently encountered that problem, so he’s trying to cut down the number of dialogue tags by replacing it with character actions.
But what’s the correct way to do that?
Let’s step back and take a look at what dialogue tags and action beats are.

What are dialogue tags?

Dialogue tags, also called “speaker attributions,” serve to let readers know who’s speaking. Usually, you should use said because tags like muttered, quipped, grumbled, etc., are distracting and pull the reader’s attention away from the dialogue itself.

What are action beats?

Action beats, also called action tags, are an alternative way to identify the speaker. These are sentences that describe the action of the character who’s talking.

Example: “This looks weird.” Anna pushed her glasses up her nose and squinted at the text.

While dialogue tags give no additional information other than letting us know who’s talking, action tags also have other functions:

What are the do’s and don’ts of using action beats?

Here are a few tips on how to use action beats and dialogue tags:

“You just need to sign,” she said, handing Lisa the contract.

Rewrite: “You just need to sign.” She handed Lisa the contract.

Here’s an example from True Nature, one of the paranormal romances I wrote under my pen name, Jae.

The night clerk behind the front desk barely looked up from the blaring TV when they entered the otherwise empty lobby. “One room or two?”
“Two,” Rue said.
“One,” Kelsey said at the same time.
When Rue and the desk clerk stared at her, Kelsey lowered her gaze, her ears burning. “I didn’t mean… I just thought…”
“You thought I would try to sneak out to continue the search and just leave you here,” Rue said.
Kelsey ducked her head, but she couldn’t deny it.
“I wouldn’t do that.” Rue kept eye contact, but Kelsey couldn’t tell if the blue eyes hid anything or not. “But if it would make you feel better, we can share a room.”
Swallowing, Kelsey nodded. While it might make Rue feel as if Kelsey didn’t trust her, she couldn’t take the risk of being left behind.
Rue received the room key from the desk clerk and started up the creaky stairs. “Come on,” she said over her shoulder. “We can be like Thelma and Louise, sharing a room on our road trip.”
“Um…” Kelsey paused, then hurried after her. She wasn’t a big fan of human movies, but she’d heard of this one. “Isn’t that the movie where they die in the end?”
For the first time since leaving Clearfield, Rue laughed. “All right. Maybe not the best of comparisons.” She unlocked the door, stepped into their room, and sat on one of the beds, bouncing to test the mattress. Then her brow furrowed, and she reached beneath herself. “Look at that. A little welcoming present from the management.” She held up a condom and a handful of breath mints. “How romantic.”
Belatedly, Kelsey remembered that the motel was renting out rooms by the hour too. She rubbed her neck as if it would force down her blush. “Oh. You think he thought…?” She gestured in the direction of the lobby.
“That you insisted on renting just one room because you’re trying to have your wicked way with me.” Rue waggled her eyebrows.

If you have any other questions about action beats and dialogue tags, please leave a comment.

14 thoughts on “How to use action beats in your writing”