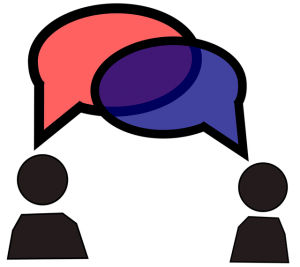 One little thing that drives many editors crazy is incorrect punctuation of dialogue and action beats.

Let’s start with a definition:

A dialogue tag is a speaker verb such as “Tina said.” It tells your readers which character is speaking.

An action beat is something a character does.

“I should be going.” Tina edged toward the door.

While dialogue tags and action beats can have the same function—identifying the speaker—they aren’t punctuated the same.

Correct: “Are you out of your mind?” she asked.

Correct: She opened the door and called, “Hello? Anyone home?”

Correct: “I wouldn’t have forgotten the appointment,” she said, “if you had reminded me in time.”

Correct: “I have no idea where Thomas is,” she said. “I haven’t seen him all day.”

Unlike dialogue tags, action beats are always separated from the dialogue by periods.

Verbs such as smiled, grinned, laughed, etc., are action beats, not dialogue tags, so please don’t use commas to separate them from a line of dialogue.

Correct: “This looks weird.” She squinted down at her steak. “Can BBQ sauce go bad?”

Wrong: “This looks weird,” she squinted down at her steak. “Can BBQ sauce go bad?”

Use commas with dialogue tags and periods with action beats, and your editor will love you forever (or at least not curse your name)!