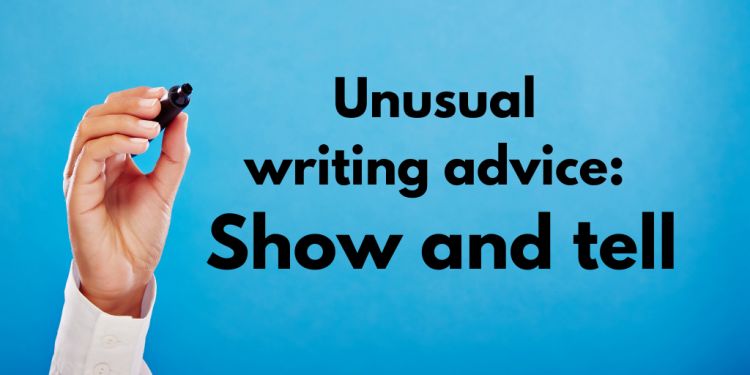 You have probably heard the writing advice to “show, don’t tell.”

Most of the time, it’s good advice because showing keeps readers actively involved in the story. But, as with most writing rules, there are exceptions.

What does “show, don’t tell” mean?

Basically, showing means describing things in vivid details that allow readers to come to their own conclusions, while telling means giving readers summaries and interpretations.

Telling: She was exhausted.

Showing: She sank onto the couch. Sweat made her T-shirt stick to her back. God, she’d kill for a shower! In a minute, she’d get up and take one, but right now her sandals felt as heavy as cement boots, and she struggled to keep her eyes open.

Is showing always better than telling?

When you’re showing, everything happens in real time. As you can see from the example above, events take up more space on the page if you show them instead of telling. If you describe something at length, readers will automatically think that the event or action holds a certain importance. So if you have unimportant, everyday tasks in your story, it might be better to tell.

Here’s an example from one of my short stories, “Seduction for Beginners”:

The woman behind the front desk took one look at their sodden clothes and quickly checked them in.

It’s Valentine’s Day, and my main character, Annie, has booked a room at a cozy little inn to seduce her girlfriend. If I wrote half a page of dialogue about the inn’s manager welcoming them, handing over the key, and letting them know at what time they can have breakfast, it would distract readers from what’s really important in this scene. So instead of showing all the details of their interaction with the manager, I summarized and just said that the manager checked them in.

When is it better to tell instead of showing?

In my book Show, Don’t Tell, I list eight situations when telling might be the better choice. Here are the top 3:

Show readers the important parts that move the plot forward or reveal something about the characters or their emotions, but use telling to sum up boring or unimportant details.

Showing: I moved my mouse to the top-right corner of the screen and clicked on the X icon to close the browser.

Telling: I closed the browser.

Telling can be useful for transitions between scenes, when you are jumping ahead in time, switching point of view, or jumping to another location. At the beginning or end of scenes, you can use telling to summarize a span of time or distance and debrief your readers on what happened in between the scenes.

Betty locked her apartment door and drove to work.

“Drove to work” is telling. Unless something important, for example, an accident, happens on the way to work, you don’t need to show the car ride. Sum it up by telling readers that she went to work.

Most of the time, you should avoid showing readers the same thing twice. Telling can be a great way to avoid repeating information. For example, it can be used to summarize when one character is telling another about something that the reader witnessed happening.

Example from my historical novel Shaken to the Core:

“What’s he doing?” Kate whispered and looked around. “Doesn’t he know that the mayor banned the sale of alcohol? If the soldiers catch him, he’ll have the wine poured out—or worse!”

Giuliana didn’t want an overeager soldier to shoot Luigi, so she hurried toward him and told him what Kate had just said.

The “told him what Kate had just said” is telling—but in this case, the good form of telling. Using reported dialogue saves me from having to repeat Kate’s words.

If you’d like to read more about show and telling, check out this blog post. You can also download my writers’ guide Show, Don’t Tell, which is free at most online bookstores such as Amazon and Barnes & Noble.