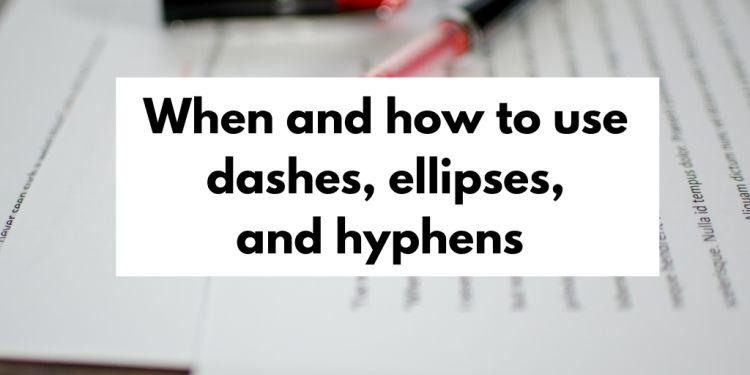 When I’m editing, I often come across manuscripts in which writers used an ellipsis when they should use a dash or the other way around. Sometimes, I also see hyphens used instead of dashes.

So here are some simple rules of thumb for when and how to use dashes, ellipses, and hyphens.

An ellipsis consists of three dots.

Style guides differ on whether there should be spaces between the dots of an ellipsis and before/after an ellipsis.

The Chicago Manual of Style (17th edition) prefers spaced ellipses, with a space before and after the ellipsis. Use nonbreaking spaces (Ctrl+shift+space bar) to prevent the dots of an ellipsis from being separated at the end of a line.

Some publishers instead prefer to use the unspaced one-character ellipsis that word processors such as MS Word create when you type three dots. Take a look at your publisher’s style guide to check their preferences. For example, here’s the style guide for my publisher, Ylva Publishing.

Use an ellipsis in dialogue to show that the character is pausing, hesitating, stammering, or trailing off.

If you use an ellipsis at the end of a question, make sure you don’t omit the question mark.

Most of the time when we say dash, we mean an em dash, which looks like this: —

It’s called em dash because it’s as wide as a capital M on a typewriter.

There should never be a space before or after an em dash.

If you type in two hyphens/minus without a space before or after, most word processors automatically convert it into an em dash. Or you can create an em dash by typing Ctrl+alt+minus on your number pad.

Use a dash in dialogue to show an interruption or a sudden break in thought.

If normally a comma would precede a dash—for example, before a dialogue tag—omit it.

“I would never—” Tina began, but Maggie interrupted her.

You can also use dashes if you’re interrupting dialogue with a gesture.

“The way she looks at you is”—she glanced at her daughter—“not fit for underaged company.”

In narrative, em dashes can be used to set off asides or information when commas wouldn’t be strong enough.

Instead of swiping her card or handing Denny a bill, she dug through her purse for the exact amount—eight dollars and ninety-three cents—while the line of waiting customers behind her got longer and longer.

The less common type of dash is an en dash, which is shorter than an em dash but longer than a hyphen. It looks like this: –

The en dash is mainly used to connect numbers.

To create an en dash, type Ctrl+minus on the number pad.

In fiction, most of the time, you’ll use the em dash, not the en dash.

While dashes are used between words, hyphens are used within words to connect compounds.

You can also use hyphens to indicate a stutter in dialogue.

Now that you know the difference between dashes and ellipses, here’s one final tip that is true for both:

Use them sparingly. If you overuse them, they lose their effectiveness. Too many dashes interrupt the flow of your story and make your writing choppy. Too many ellipses make your characters sound insecure and will start to annoy your readers.

I suggest doing a manuscript-wide search for ellipses and dashes. If every page is littered with ellipses or dashes, cut some of them.

9 thoughts on “When and how to use dashes, ellipses, and hyphens”