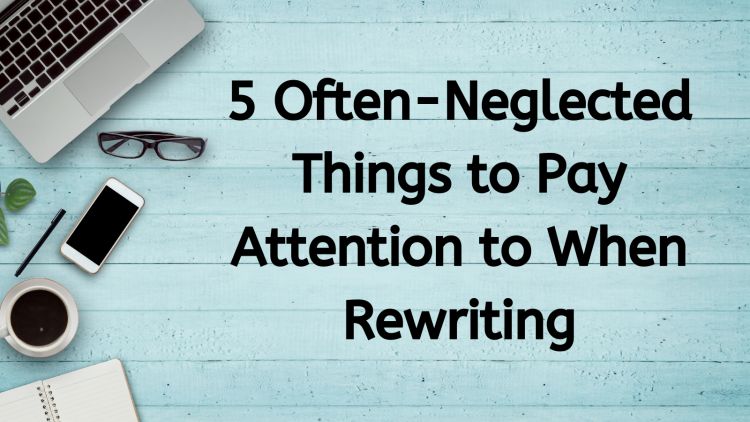 Today, I’m sharing a guest post by Rose Atkinson-Carter who offers helpful tips for rewriting and revising your novel.

Rewriting can be a stressful stage of the writing process. Unlike writing your first draft, where you know you can put off all thoughts of editing or quality control for later, or the editing stage, where you’ve got a full first draft in front of you that just needs some serious polishing, rewriting exists somewhere in the middle. It’s a careful balancing act between improving the way you had told the story in your first draft and starting from scratch (which you want to avoid) in the search for better options.

Rewriting involves keeping track of several moving parts, so to help you along this process, I’ve gathered 5 things writers often lose track of as a reminder for your next rewrite.

From friends and writing workshops, I’ve read far too many drafts that accidentally keep switching between the past and the present tense within a few lines. Sometimes this is a first draft problem, where the writers are just too focused on the plot line’s development and lose track of the chronological position of early events, or simply slip up as they’re typing. Other times it’s a self-editing error, made when an author decides to change the story from one tense to another but misses out a few instances of the old tense.

The easiest way to control these lapses is to pause and think about why you’ve chosen one tense over another. Usually, you can tell that one tense doesn’t work for your story — perhaps the present doesn’t work with the amount of reflective thinking done by your characters or the past tense isn’t immediate and urgent enough. Once you’ve clarified why you’ve chosen your tense, it will be easier to maintain consistency throughout.

Try to bear tenses in mind as you rewrite — mistakes can be spotted down the line with a copyedit, but your manuscript will benefit from the mental clarity that comes from making firm decisions about the chronology of your story as early on as possible.

2. Weather and time of day

To pedantic readers like me, it’s very frustrating when a book’s characters are sitting by the fireplace in one scene, then wearing T-shirts in the next, or in any way experiencing utterly inconsistent weather conditions.

To be more specific, there are two things in particular you should watch out for:

Rather than lapse into either of these two, keep in mind the physical conditions experienced by your characters, using your imagination to place yourself in the middle of your own story. As you rewrite, try to minimize sudden changes and over-explanations, instead choosing the weather conditions that best complement your story and sticking with them for as long as possible to avoid confusion. If you need to, print out a photograph showing similar weather conditions and keep it near your desk, to help you remember the sensory details that come with, say, hot temperatures or snow.

Many writers (especially those writing thrillers, suspense, or mystery) are very tempted to weave in hints for future plot developments, but sometimes this becomes way too obvious. In first person point of view, this violates the character’s perspective — but even if you’re writing in third person or omniscient point of view, too many suggestive allusions can be overwrought and painfully transparent.

This also applies to overly suggestive dialogue — if the two people involved in your romance story have just met and it’s clear they like each other or are about to develop into love interests, there’s no need to have the characters spell it out for the reader. Find subtle ways to weave their interest into the scene — describe their body language or their thoughts after the meeting. Having a character declare their relief that the other isn’t married yet out loud is about as obvious as having them say “I am pleased, because I plan to develop a crush on you and propose by chapter 19.” There’s a reason “show, don’t tell” is a thing, and it should also apply to the hints you decide to drop into your narrative.

For more on “show, don’t tell,” check out Sandra’s thorough guide on the subject.

When rewriting, there are a lot of darlings that get killed. When the darlings you have to sacrifice happen to be whole scenes, it’s generally best to commit to either keeping them or cutting them out entirely. From the reader’s point of view, it’s awkward when you can tell that the writer has drastically reduced the word count in a scene, but couldn’t bear to part with it completely.

To remedy this, ask yourself why you were killing this scene in the first place. Did you feel that it was redundant? If yes, isn’t it best to part with it entirely? If you’re just keeping scenes in because you feel they include a lovely sentence, you’re doing it for the wrong reasons. All scenes should serve a purpose — usually to introduce a new character or setting, raise the stakes, or move the plot forward. If the scene you’re looking at is doing none of these things, it’s best to let it go completely and just save the phrases you liked in your notebook. Maybe you can use them in another project!

Many writers change character names halfway through writing a draft or change names on the first rewrite — so it’s really important that you perform a thorough check and confirm that all instances of the previous name are now changed to the new one. Otherwise, you’ll end up with a mysterious ghost-character sometimes speaking or leaving cryptic items behind.

Depending on what writing software you’re using, you should be able to hit Ctrl + F (Windows) or Command + F (Mac iOS) to search through your document. This can be very helpful when double-checking that you’ve removed all instances of an old name!

This list isn’t meant to stress you out. A rewrite, as I said in the beginning, is not meant to be a final draft. You’ll still be editing it before it goes anywhere near publication, ideally with the help of a professional, and if any of these issues are present in your manuscript, an editor is sure to spot them. Still, the more careful you are early on in the process, the less painful it will be to thoroughly edit your work later on. I hope these thoughts have been helpful, and best of luck!

Rose Atkinson-Carter is a writer with Reedsy, a marketplace that connects authors with some of the world’s best editors, designers, marketers, ghostwriters, and translators. She lives in London.