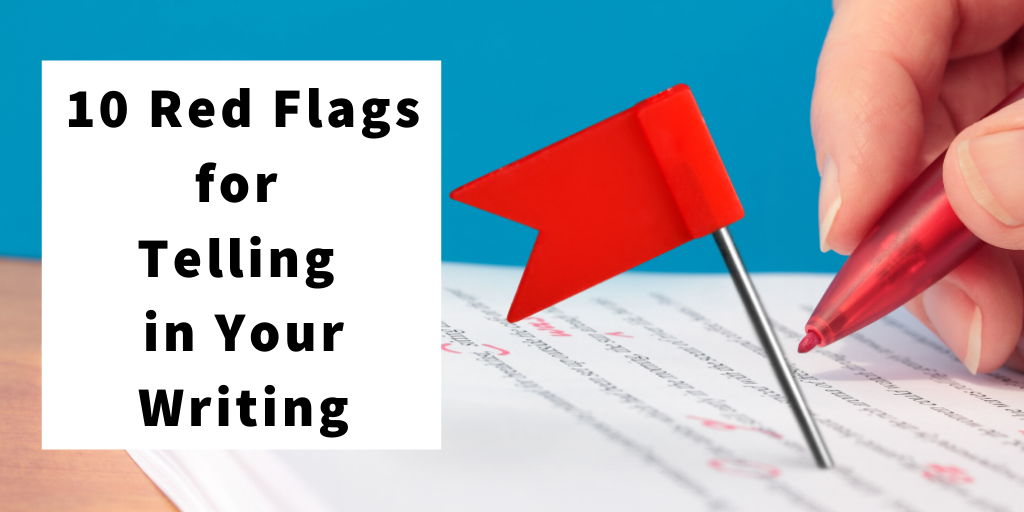 We have all heard the advice to show, don’t tell in our writing. But how do you know you’re telling?

If you give your readers conclusions, you are telling. To show, provide them with enough action, body language, and dialogue so they can come to the conclusions themselves, without you, the author, telling them.

Telling: It was obvious that he was trying to pick a fight.

Showing: “What did you just say?” Snarling, he stepped forward, right into John’s space.

What exactly does “vital status” mean in this context? And what did she do to check it? We’re not getting a mental image from this vague description.

Showing: She bent and placed two fingers on his neck. A faint pulse throbbed beneath her fingertips.

If you sum up what happened, you’re telling. Sometimes, I come across a manuscript that reads like a synopsis and that sums up everything that is happening instead of showing it in actual scenes. That’s fine if you are actually writing a synopsis, but not for your novel. Readers don’t just want to get a general idea of what happened; they want to see specific details.

Telling: The dog attacked. She tried to defend herself.

What exactly did the dog do? Jump? Bite? Growl? And how exactly did she defend herself? Kick the dog? Use a stick?

Showing: The dog leaped, canines bared. She threw up her arm to protect her throat.

Telling: I had tested the car to see if it would start. It didn’t.

If you find yourself using an adverb, you are usually telling. Whenever possible, cut the adverbs or replace the weak verb/adverb combination with a stronger verb that makes the adverb unnecessary. Of course, you shouldn’t cut all adverbs from your writing, but use them sparingly.

Showing: Tina strolled down the street.

The adverb (slowly) tells your readers how Tina walks; the verb strolled shows it.

Like adverbs, adjectives can also be telling, especially if they are abstract adjectives such as interesting or beautiful.

Telling: I was afraid.

Showing: Oh God, oh God, oh God. My knees felt like squishy sponges as I fled down the stairs.

Adjectives can often be found in combination with linking verbs. Linking verbs are verbs that connect a subject with an adjective or noun. Examples are was/were, felt, appeared, seemed, looked. The problem with them is that they are weak, static verbs that don’t show us an action. Replace most of them with more active verbs.

Examples (with the linking verbs set off in italics):

Telling: It was cold.

Showing: She breathed into her hands to warm her numb fingers.

Showing: She rubbed her burning eyes.

Telling: Tina looked as if she was going to cry.

When you’re naming emotions, you are telling. Keep an eye out for adjectives such as “surprised” and “angry” and nouns such as “amazement,” “fear,” and “confusion.” Instead of naming emotions, use actions, thoughts, visceral reactions, and body language to show what your characters are feeling.

Showing: When the door closed behind John, Betty wiped her brow.

At times, naming an emotion can work, though, if you make the emotion word the sentence’s subject and pair it with a strong verb. But use this technique sparingly, or it will start to jump out at the reader.

Filter words (more about them in this blog post) are verbs that describe the character perceiving or thinking something, for example, saw, smelled, heard, felt, watched, noticed, realized, wondered, and knew. The problem is that filter words tell your readers what the character perceives or thinks instead of letting them experience it along with the protagonist. So, cut out the “she realized” and “he saw” and make the sentence just about the thing she realized or the sound he heard.

Showing: Betty sucked in a breath.

Telling: Tina realized she had lost her keys.

Showing: Tina patted her pockets. Nothing. Oh shit. Where were her keys?

10) Using dialogue tags other than said

If you use dialogue tags such as “she demanded,” “he agreed,” or “she scolded,” you are telling your readers how a line of dialogue should be read. Instead, let the dialogue speak for itself or reinforce it with a line of description.

Telling: “You can’t make me!” she exclaimed.

Showing: She dug in her heels. “You can’t make me!”

How to use these red flags to revise your manuscript

For some of these red flags, you can use the search feature (CTRL F) of your writing software to find and replace them.

To learn more about how to show instead of tell in your writing, check out my book Show, Don’t Tell: How to write vivid descriptions, handle backstory, and describe your characters’ emotions. It’s FREE on Amazon in the US right now and on sale for 99 cents in most other countries. 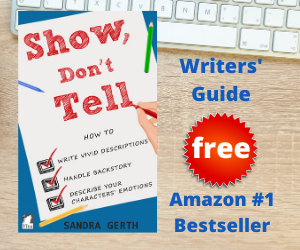 10 thoughts on “10 red flags for telling in your writing”