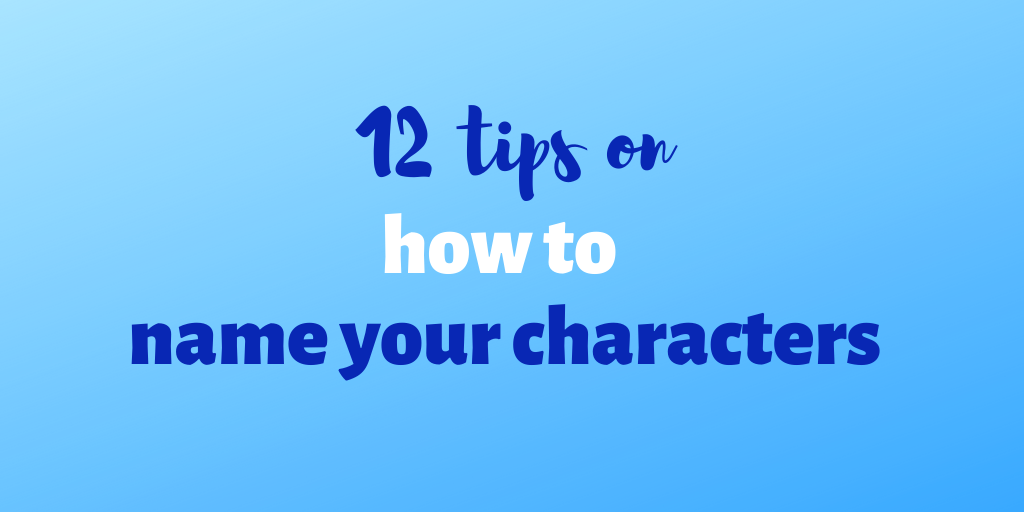 Naming your characters can be difficult since there are so many things to be taken into consideration when choosing character names.

Here are 12 tips to help you find the perfect names for your characters:

1. Keep the time period of your story and your character’s age in mind.

Names often go in and out of fashion. For example, Bertha was one of the top 10 most popular names for girls in 1880, so if you are writing a historical novel, it might be a good name for your heroine, but if you name a character Bertha in a contemporary novel, readers will assume she’s an older woman.

Make sure the names you pick for your characters are historically accurate. Do some research into when the names you have in mind came into general use. Genealogical websites and literature written in that era can be helpful resources. If your story is set in the US, the Social Security Administration’s website is a great resource too. It shows the most popular names for boys and girls for each year as far back as 1880.

Also, keep in mind that some names used to be considered boys’ names but are now more typically used for girls or the other way around. For example, Ashley was the name of the young man Scarlett O’Hara was pining after in Gone With the Wind by Margaret Mitchell, but it’s now more strongly identified with a girl’s name.

2. Make sure your characters’ names fit their ethnic background.

When picking names for your characters, also keep their cultural and ethnic backgrounds in mind. For example, one of the main characters in my novel Heart Trouble is Persian-American, so I named her Laleh Samadi. The name of the protagonist in Ask, Tell by EJ Noyes—Sabine Fleischer—indicates her German roots.

3. Pick a name that fits the character’s personality.

4. If you want, pay attention to a name’s meaning.

Most names have a meaning. You don’t have to reveal it in your story, but you could pick a name with a meaning that fits your character and their role in the story. For example, Suzanne Collins named the main character of The Hunger Games, Katniss, after a plant that translates to “archer.” (For those of you who haven’t read the book or seen the movie, Katniss is great with a bow and arrow.)

If your characters have names that look or sound too similar, your readers might become confused and not be able to tell the characters apart. Don’t give several characters names that

6. If you give your character an unusual name, make sure you have a good reason.

Of course, you want your character to stand out and be memorable, but giving them an unusual name is not the best way to achieve that. If your character does have a name that stands out, make sure you give an explanation. For example, the main character in my novel Perfect Rhythm is named Leontyne. We find out that her father named her after Leontyne Price, his favorite opera singer. Her father is a violinist, and he wanted his daughter to follow in his footsteps, and that’s part of the conflict between them in the book.

7. Keep in mind who picked your character’s name.

In most societies, the parents pick a baby’s name, but that’s not always the case. So think about who named your character–a parent, a relative, the character themselves, or is there another naming tradition in the world of your story? In any case, the name of your characters should reveal something  about the person who picked the name too. For example, in my romance novel The Roommate Arrangement, one of the main characters is named Raelynn Joy Coleman. Her parents are unconventional free spirits—basically hippies at heart—who named her Raelynn (resembling “ray of light”) because she was born on a sunny day.

8. A character’s nickname can tell you a lot about the person too.

Sometimes, characters will choose to shorten their names or go by a nickname. Is your character a Mike, or does he insist on Michael? Does she go by Jennifer or Jenny or Jen? For example, the main character in The Roommate Arrangement hates her full name and prefers to go by Rae. She rejected not just her name, but also her parents’ hippie lifestyle.

9. You might want to avoid names ending in s.

At least for your protagonist, whose name you’ll be using a lot in the book, it might be best not to use a name that ends in s, e.g., James. Names ending in s lead to awkward possessive forms such as James’s sister.

10. Make sure the first name and last name flow well together.

Usually, a short first name goes well with a longer last name and the other way around, and a common first name can be more effective with an unusual last name and the other way around. If your character often goes by a shortened version of their name, make sure the shorter name also goes well with the last name. For example, Jennifer Perry might flow well, but Jenny Perry might not.

11. Avoid using the name of a famous real or fictional person.

Once you decided on a first and last name, make sure it’s not the name of a celebrity or a character from a popular book. I usually look up the name on Wikipedia.

12. Don’t name all of your characters.

Not all of your characters need a name. Walk-ons such as the taxi driver or the barista might not need a name. Naming a character within the story tells readers to pay attention because this character is going to be important. If the character is only going to be in one scene and barely interacts with the protagonist, you might just want to call them “the taxi driver” or “the barista”–unless you have a good reason to give them a name, e.g., to show that your main character is the kind of person who would know their barista’s name.

How do you come up with character names?

Can you think of other character naming tips I forgot to mention?

23 thoughts on “12 tips on how to name your characters”