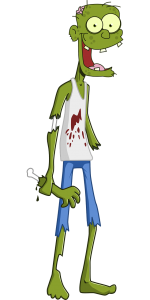 You have probably all experienced it: you’re reading a book—maybe a romance or a mystery novel—and suddenly, you grind to a halt and wonder where all these zombies are coming from.

Her eyes followed Kathryn around the room.

Her fist knocked on the door.

He dropped his eyes to the floor.

His arms wrapped around her hips.

The wording of these sentences makes it appear as if the body parts take on a life of their own and act independently of the character. It can cause comical images to flash through readers’ minds and will throw them out of the story.

In addition, disembodied body parts distance readers from the characters by taking the spotlight away from them.

Sometimes, these sentence constructions also lead to dangling participles such as:

Gazing through the windshield, her fingers clutched the steering wheel.

So, how do you avoid autonomous body parts in your writing?

Make your characters, not their body parts, the subject of the sentence. If your characters’ eyes are the offenders, you can often replace the word eyes with gaze.

So one way to rewrite the above sentences might be: 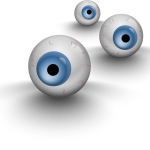 Her gaze followed Kathryn around the room.

She knocked on the door.

He lowered his gaze to the floor.

He wrapped his arms around her hips.

Gazing through the windshield, she clutched the steering wheel.

Does that mean it’s always wrong to use autonomous body parts and you need to eliminate them all?

Some editors would certainly say so and will always edit them out, no matter what, but I think they can have their uses every now and then.

Body parts as the subject of a sentence can be used to indicate that it’s an involuntary, unconscious action.

His hand automatically reached for the cigarette pack.

They can also be used when the point of view character doesn’t know who the body parts belong to:

Strong arms grabbed her from behind.

Every now and then, making body parts the subject of the sentence is also necessary to vary sentence structure, especially in gay and lesbian fiction, where you’d otherwise end up with a string of sentences starting with she or he.

So, my advice would be to avoid autonomous body parts most of the time. Use them only if you want to achieve a certain effect and make sure you’re not making your readers think of zombies—unless, of course, you’re actually writing a novel about undead creatures.

Writers, how do you handle autonomous body parts? Please leave a comment.