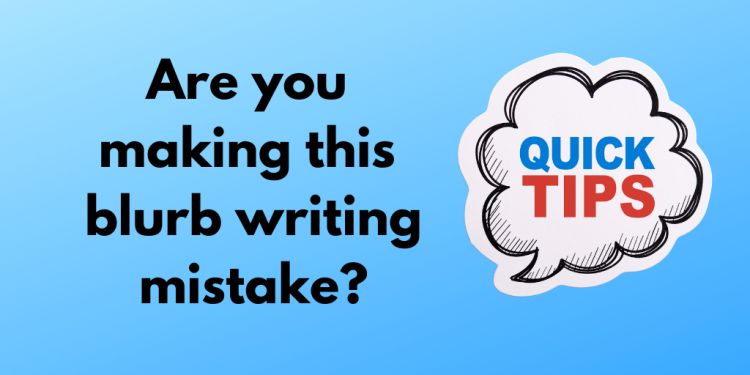 The blurb of your book is arguably one of the most important pieces of writing you’ll do for your book. If you’ve done a great job, the short description that goes on the back cover and the sales page will capture readers’ attention and convince them your book is exactly what they want to read right now.

If done wrong, the blurb will make readers decide not to take a chance on your book and read something else instead.

There are many mistakes to avoid when writing your book blurb, e.g., writing an overly long summary of the entire book, but I won’t dive into that in this blog post.

Instead, I’ll focus on one little thing that will make me as a reader give a book a hard pass: punctuation mistakes in the blurb.

I know a misplaced comma sounds minor, but if the author can’t get the details right in the blurb, I don’t trust them to get the big-picture things in the novel right either. The devil really is in the details.

Here are a few examples from blurbs I’ve seen lately. I have rewritten them a bit to protect the not-so-innocent. See if the puncutation in these blurb opening sentences makes you pause too.

Adrenaline-addicted ER physician, Ben Harrington, has no intention of ever returning to his hometown.

The life of accountant, Amy Murphy, is predictable, and that’s the way she prefers it.

So, what’s wrong with the commas in these blurbs? Well, most of them aren’t necessary. Let me explain.

An appositive is a noun or a noun phrase that precedes or follows another noun and gives readers more information about it.

Blurbs often include appositives because we’re trying to give readers a lot of information about our characters within just a few sentences.

However, there are two types of appositives, and only one of them requires commas.

Tom’s friend Blake is a social worker too.

Since Lisa probably only has one best friend, her name is additional, nonessential information, so we set it off with a pair of commas.

In comparison, we need the name of Tom’s friend to understand what character we’re talking about because Tom probably has more than just this one friend. So his name is essential information, which isn’t set off with commas.

So when you are deciding whether the appositives in your blurb need commas or not, always ask yourself: Is your character the only friend/physician/single mom, etc.?

So the opening sentences of the blurbs above should be:

Adrenaline-addicted ER physician Ben Harrington has no intention of ever returning to his hometown.

Ben likely isn’t the only adrenaline-addicted ER physician, so we need to know his name to know who the sentence is talking about. It’s essential information, so no commas required.

Vivian isn’t the only no-nonsense single mom, so her name is essential information, and you wouldn’t use commas. However, unless she has several three-year-old daughters, the name of her daughter is set off with a comma.

The life of accountant Amy Murphy is predictable, and that’s the way she prefers it.

Amy isn’t the only accountant in the world, so again, her name is essential to understanding the sentence, and you wouldn’t use commas to set it off.

Example for a nonessential appositive in a blurb:

Seattle General Hopsital’s chief of the ER, Alyssa Zhao, is struggling with the loss of a patient.

Since Alyssa is Seattle General Hospital’s only chief of the ER, we don’t really need to know her name for the sentence to make sense. It’s nonessential information that is set off with a pair of commas.

I know that was a lot of grammar, but I hope it will help you write a blurb that will make readers pause in awe and click “buy” instead of pausing because they are puzzled by your comma usage.