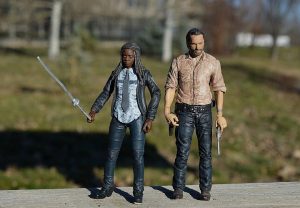 The eighth season of The Walking Dead, one of the most successful television series of all time, starts tonight. I haven’t started watching The Walking Dead when it first began airing. A TV show about zombies stumbling around, craving brains, didn’t seem that original or that entertaining to me. But once friends talked me into watching, I got that The Walking Dead isn’t really about zombies. That’s just the background. At its core, it’s a show about human nature—about people and the choices they make while fighting for survival.

And while it’s not always perfect, I think writers can learn a lot from The Walking Dead.

Here are the five writing lessons the show can teach you:

What keeps readers reading isn’t (just) a captivating plot; it’s the characters. If we don’t care about the characters, we won’t sit rooted to the edge of our seats to find out what happens to them.

So create interesting characters that readers can identify with and root for. That doesn’t mean they have to be perfect—quite the opposite. Make them three-dimensional characters who have both strengths and flaws.

In The Walking Dead, few things are black-or-white. Sometimes, good characters make bad choices. There are plenty of examples for this in the show, for example, Carol killing two innocent people to protect the group.

2. Give each character a goal and obstacles to face

No novel or TV show can exist without interesting conflicts. In order to create it, give each character a goal—and something that stands in the way of her or him achieving that goal. That creates suspense and makes readers keep turning pages.

For example, Rick Grimes wants to find his wife and son in season 1 of The Walking Dead, but that’s not an easy task in a world full of dangers. People kept watching because they wanted to find out if he’ll ever find them—and what would happen once he does.

3. Create interesting relationships between your characters

No matter whether you’re writing a romance novel, a mystery, speculative fiction, or something else, make sure to focus on the interpersonal relationships between your characters.

For example, Rick and Shane, two of the main characters of The Walking Dead, used to be friends and partners in the police force, but now they compete for leadership and for Rick’s wife, Lori. That makes their relationship complex and interesting.

4. Create characters who grow and change

For a fully satisfying read, have the main characters of your novel change as a result of the obstacles and challenges they face during the course of the story. They should overcome their fears, give up old beliefs, or be otherwise changed be the events in the book.

My favorite character in The Walking Dead is Carol. She starts out as a meek wife who’s afraid to stand up to her abusive husband; then she loses both her husband and her daughter and has to reinvent herself. She grows into a bad-ass woman who’s not afraid to make tough choices. Watching The Walking Death is worth it for her alone!

The pilot episode starts with Rick waking up from a coma and finding that the world has changed. The audience doesn’t know what has happened any more than Rick does, so they keep watching to find out. However, once you raise questions, you have to answer them too. It doesn’t have to be in the same scene, but if you wait too long, you’ll end up frustrating your readers, as The Walking Dead has done a few times.

For example, in the finale of season one, a doctor at the Center for Disease Control whispers something in Rick’s ear, but viewers had to wait an entire season to find out what it was. By then, many viewers had forgotten about it already or had grown frustrated by the long wait.

So create suspense by making readers wait to find out an answer, but don’t leave them hanging for too long. As with most things, it’s a question of finding the right balance.

Try applying these five writing lessons to your own books, and please let me know in the comments if you have any questions.

Happy writing and have fun watching The Walking Dead!